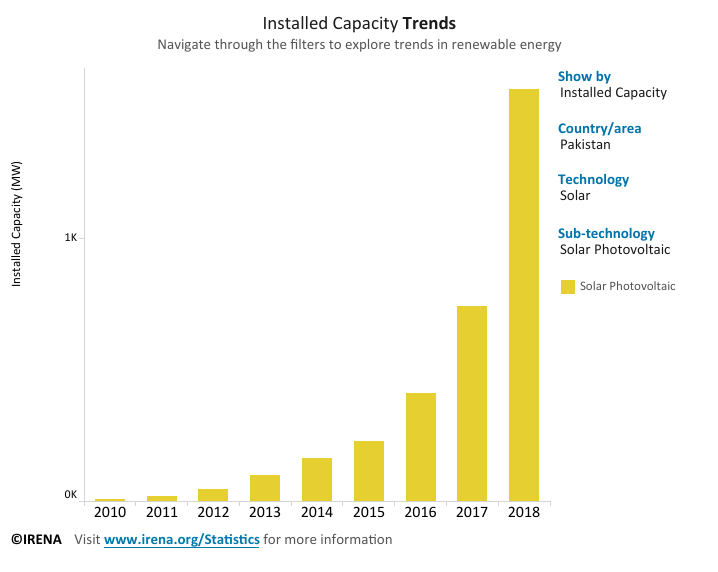 IRENA’s recent study on Pakistan’s renewable capacity shows much of the plans of Sindh, Baluchistan and Southern Punjab are ideal for solar-based energy production plants. Solar energy intensity in Sun Belt of Pakistan is approximately 1,800-2,200 kWh per square meter per day which is most favorable for the exploitation of solar energy. The potential capacity for the installation of solar photovoltaic power by some estimates is 1,600 GW, which is 40 times greater than present consumption. Based on the range of currently possible conversion efficiencies in the area of one sq. km has the potential to produce 40- 55MW power and can generate revenue conservatively estimated at Rs. 1 billion per month at current average tariffs of Rs. 10 per KW per hour. Since solar power is available only during times of sunshine, it can at most meet up to 30% of daily consumption.

In view of the growing needs of energy in Pakistan, the efficient use and development of renewable energy sources have become a major concern in the country. This has brought the intention of several national and multinational companies to design and implement a major work plan for energy conservation and construction of renewable energy sources like windmills and solar panels. Fortunately, Pakistan is among those countries in which the sun warms the surface throughout the year and therefore has a strong potential for solar power generation.

Recently, the Pakistan Government has also Launched the Clean Green Pakistan Index, which aims masses participation in curbing pollution with a larger vision of eliminating resources causing harmful emissions. Solar being, an ideal form of clean energy with considerably low panel prices, therefore, is a good replacement to coal-based power plants, already operational in the country.